Near Castelnuovo dell’Abate where the Starcia Creek runs through the valley, stands the magnificent Sant’Antimo Abbey, which has become an icon of Montalcino in the world with its apses, bell tower, and cypress tree.

Legend has it that the abbey was founded by Charlemagne when his court and army were hit by the plague while on Monte Amiata. The emperor asked for the grace of healing and, when it was granted, he built Sant’Antimo in thanksgiving for this miracle.

The construction of the original core of the abbey actually goes back to the worship of the relics of Sant’Antimo of Arezzo who died in 352 A.D. Some of the faithful built a small oratory on the relics of martyrs to be able to pray over them.

The original section was built on the ruins of a Roman villa shown in the bas-relief with the cornucopia on the north side of the bell tower or in some columns in the Carolingian crypt. There was also supposed to be a therapeutic water fountain as the inscription on a piece of stone “Venite et bibite” (come and drink) clearly implies.

The Lombard kings used abbeys as rest stops for pilgrims heading to Rome, merchants, soldiers and messengers, building them about 30 kilometres apart from one another. In the year 770, the abbot Tao was charged with the task of building a Benedictine monastery at the crossroads of a significant communication route at a time when abbeys were important artistic centers, oases of serenity and economic prosperity, entrusting him with the management of state property on which it was built.

On his return from Rome in 781, Charlemagne took the Via Francigena. When he stopped at Sant’Antimo, he left his seal on the foundation of the monastery that was still under construction. In 814, a diploma of Louis the Pious, son and successor of Charlemagne, bestowed upon the abbey many gifts and privileges, and Sant’Antimo effectively became an imperial abbey, launching it into its full glory.

This is the 8th century Carolingian Chapel of which the ancient apse is all that remains. The inside is a solitary rectangular nave whose roof was originally made with wooden trusses. A cycle of monochrome frescoes by Giovanni d’Asciano on the life of St. Benedict covers the walls. Today this chapel is the sacristy of Sant’Antimo.

Under the chapel is the Carolingian crypt formed by two apses opposite one another: the one to the east is directly under the church above with a small oeil-de-boeuf window and the one on the other side is a simple semicircular niche. Four small columns rise up to the inverted truncated pyramid capitals supporting the roof and dividing the space into three miniscule naves.

During the Carolingian era, the Benedictine community of Sant’Antimo reached the crowning moment of its splendour. The Abbot of Sant’Antimo was given the title of Conte Palatino, counsellor of the Holy Roman Empire under whose jurisdiction there were 96 castles, land, farm holdings, and mills in addition to 85 monasteries, churches, parish churches and hospitals spread out between Grosseto, Pistoia, Siena and Florence. At the beginning of the 12th century, the Abbey was strongly supported by both the Papacy and the Empire.

As inscribed on a step on the main altar, in 1118 the Count Bernardo degli Ardengheschi gave his entire patrimony to the Abbey initiating the construction of the new church. The Abbot Guidone recruited architects from beyond the Alps for the design using the French Benedictine Church in Vignory of 1050 as the model.

It is very likely that between the first monastery and this grand abbey there was another intermediary structure. In fact there is evidence of many ruins of a structure dating to a previous period. Beside the Carolingian chapel there are remains of an oratory in the original church with a crypt that walls off the sepulchre of Sant’Antimo. The Benedictine monks built a bigger church around this structure around the year 1000. Only the bell tower remains, detached from the nave according to the traditional Italian architecture of that time.

In the 12th century the current great structure was built adapting to and cutting out the volume of the presbytery in order to make room for the bell tower and the Carolingian chapel. This is why the choir is the narrowest part of the church in respect to the rest of the building.

Around the middle of the 12th century, the church was almost finished but the façade was not. In 1145, Siena, which was fighting to the north against Florence, made the Abbey of San Salvatore give up its castle in Radicofani on the Via Francigena, and Pope Clement III rendered the parish church of Montalcino to the Bishop of Siena in 1189. In 1200, Filippo Malavolti, the Podestà of Siena, headed up a military contingent and attacked Montalcino.

On June 12th, 1212, the Abbey had to give up a fourth of the territory of Montalcino, the most important centre of its own jurisdiction, to the City of Siena. This marked the beginning of the decline of Sant’Antimo. Siena gradually drained the assets of the monastery to the point that the Abbey owned only a fifth of all of its previous property by 1293.

Nowadays is possible and donvenient to visit S. Antimo in a tour that starts from Montalcino and finishes at this beautiful abbey in the Tuscan countryside. 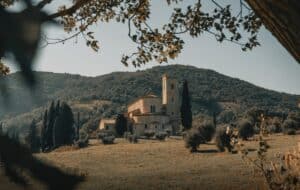 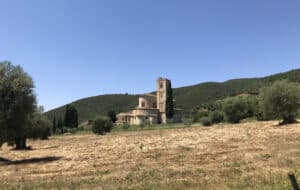 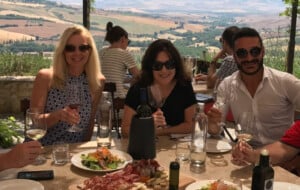 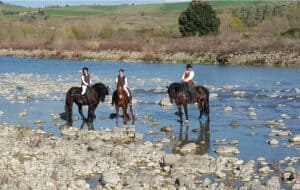