In the center of Tuscany between Florence, Siena and Arezzo, there is the wonderful and charming Chianti area, a hilly land that stretches for about 20 km surrounded by the main “art” cities in the region.

The ancient Chianti region, first Etruscan and then Roman, was (and still is) rich in woodlands, water, and game. Except from the main roads, Chianti was not easily accessible, protecting it from the Barbarian Invasions after the decline of the Roman Empire.

From the Middle Ages to the Renaissance, it was a continuous battlefield because of the clashes between Siena and Florence, which both sought control over these lands. Castles and fortresses that sit on top of many hills are proof of its tormented past. When the medieval conflicts ended, some valleys were cleared and cultivated. Chestnut and oak woods as well as olive groves and vineyards started to take over and all continue to enrich the landscape and the economy of the Chianti region today.

The scenery often seems like a painting or a postcard, too beautiful to be true. Castles, towns, and villages built in stone stand out as natural elements of the landscape as well as farms, parish churches, and Renaissance villas, which are often surrounded by woods or framed by the green geometry of vineyards and olive groves and can be reached along cypress-lined roads.

Is that enough to make you want to come here? Well, if not, you should also know that the food is extraordinary, not to mention the wine… What are you waiting for? The heart of this territory is the birthplace of the popular Chianti Classico wine: Radda, Gaiole, and Castellina are the three towns belonging to the ancient Chianti League.

Radda in Chianti is a very small and lovely town surrounded by large defensive walls. The main structure of interest inside Radda is the Palazzo del Podestà, the town hall, built during the 15th century, then completely destroyed by the Aragon invasion in 1478 and rebuilt in 1700. The outside facade of the building is covered by coats of arms of local families. Today there are 51 of them (three dating back to the 15th century, 25 to the 16th century, 16 to the 17th century, and 7 to the 18th century) giving the building a very unique look. Every year, the town fills its streets with wine and happiness during “Radda nel Bicchiere“, a wine event in which visitors, locals, and wine enthusiasts can discover and taste all the wines produced in this blessed corner of the Chianti.

The surrounding hills are famous for their tower houses, ancient parish churches, and castles. Probably the most important example is Castello di Volpaia, a fortified village still maintaining most of its original architecture after having been successfully restored.

There are many different kinds of accommodation in the area: many beautiful ‘agriturismo’ in the countryside with lovely views or stunning palaces in town, such as Palazzo Leopoldo, Palazzo San Niccolò, or Relais Vignale. Last but not least and only a ten-minute drive out of town, there is a very special place, Il Borgo di Vèscine, an entire small village dedicated to welcoming people and helping them live the dream!

The town of Gaiole in Chianti is another important city within the Chianti Classico region where the main attractions for your palate alternate between wine and olive oil. In addition to Chianti Classico wine, the real attraction of Gaiole is its surroundings which include beautiful castles and parish churches.

The Castello di Barbischio overlooking the town, Castello di Meleto, and the fortified hilltop village of Vertine are just some of the other amazing attractions in this area.
A special mention goes to Badia a Coltibuono, a former monastery founded in 1051 and owned by the Vallumbrosan order of Benedictine monks until 1810. In the 15th century, it was extensively developed under the patronage of Lorenzo dei Medici. Subsequently, it was transformed into a farmhouse-villa, and the estate is still productive. Badia a Coltibuono is now a famous wine producer. The current owners, the Stucchi-Prinetti family, have excelled in marketing their wine and other agricultural products. The abbey church and gardens may be visited as part of a local guided tour, and the property also houses a well-known restaurant. Both are worth a visit!

Gaiole also claims to have the largest winery in the Chianti Classico area: Brolio Castle where Baron Bettino Ricasoli invented the Chianti formula in 1872. The castle as it is today is mostly a Gothic Revival creation carried out under the direction of Bettino Ricasoli.

The property is huge and stunningly beautiful. The ramparts and the gardens can be visited free of charge, and there is a splendid view over the surrounding countryside. The castle also offers a paid historical tour which includes the gardens and the museum as well as a paid wine tour which includes a wine tasting. The interior apartments of the castle are not open to the public. The Ricasoli family continues to produce wine with excellent results!

To really live the dream while in the area, Castello di Spaltenna is the one for you. You can stay in “simple”’ rooms, suites, or entire villas. Each type of accommodation is very unique, and the spa is the icing on the cake!

Castellina in Chianti lies slightly closer to Siena than to Florence. Nearby are the ruins of two Etruscan tombs. The town was heavily damaged during World War II but still retains some attractive architecture, including two Renaissance buildings and the fortress that dominates the town. Not far from Castellina, the pretty wine village of Fonterutoli should not be missed: very little is left of the original church and the castle, but the property has been in the Marchesi Mazzei family since 1435, and 24 generations of that family have been making wine here ever since.

Greve in Chianti is effectively the market town of the Chianti Classico wine region. Unlike most Chianti towns, Greve is located in a valley instead of on a hilltop. It is considered a kind of gateway to the Chianti as it is the first town you meet of this wine region if you are coming from Florence, and the truth is that you can feel it. The landscape changes a lot. Hectares of vineyards take the place of the forest, at every turn (and there are plenty of them!) you can see signs for wineries, wine shops, direct sales, and so on! Greve has an attractive, unique, triangular piazza with several ceramic and wine shops as well as restaurants.

Inside the Greve territory, the small town of Panzano had a stormy past. Located in the middle of the constantly feuding powers of Siena and Florence, it was destroyed in 1260, in 1397, and again in the 1400s and 1500s, alternating between Sienese and Florentine rule. What remains of the original medieval center is now incorporated in the bell tower of the church in the Panzano Alto.

But what Panzano is mostly famous for today is Mr. Dario Cecchini and his meat! He is a real character, a volcanic personality and has an excellent memory as he knows Dante’s Divine Comedy by heart, besides being a very skilled butcher. In his butcher shop and restaurants “Officina della Bistecca“, “Solociccia” and “Dario Doc“, you will have the opportunity to savor the results of eight generations of butchers. Dario’s meticulous attention to the life of his animals, to the quality of his meat and to the preparation of every cut of meat in the best way will win over your palate!

Everything you have just read is the very heart of the Chianti Classico area, but the wine region also includes parts of other districts around it. There are some of the most beautiful Italian gardens belonging to stunning villas, churches, castles, and paths just waiting for you!

Embark on your adventure in Tuscany with us and explore the culture, the landscapes, the wines, and the people of Chianti! 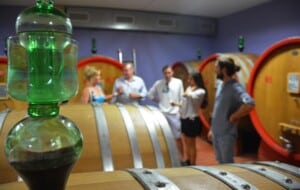 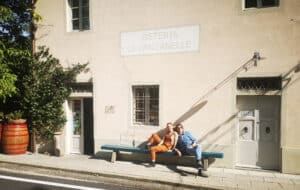 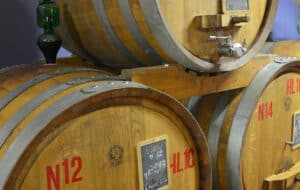